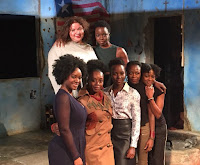 
“Eclipsed”, set during the Liberian Civil War, tells the story of five extraordinary women brought together by upheaval in their homeland of Liberia, who forge a close-knit community that inspires them to feats of increasingly greater strength.
Posted by Beti Ellerson at 23:29