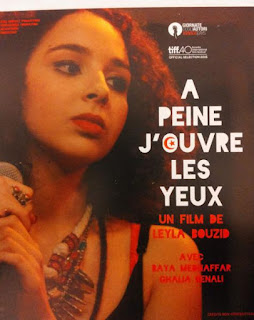 Source: Africultures. Translated from French by Beti Ellerson. (A collaboration between the African Women in Cinema Blog and Africultures).

As I Open My Eyes, by Leyla Bouzid: To still be able to sing by Olivier Barlet

Crowned with awards at international festivals from Venice to the Carthage Film Festival, Leyla Bouzid’s feature debut comes out on French screens the 23rd of December. A nice gift for the holidays!

Farah is like a tornado: she advances in twists and turns and nothing seems to be able to stop her. She is the momentum of the youth who wants to love and express themselves freely. With her group of young musicians, she intensely sings the lyrics that call for a change in the state of things; because as soon as she opens her eyes, she sees "the people who are poor, despised, vexed, exiled from this world of closed doors". We are in 2010, it is summer, and even as the anger grows, nobody knows that at the end of the year the Tunisian revolution will take place: "As the night owl, I see people destroyed; their guns are loaded, their dogs are mad."

It would have been easy to make a revolutionary muse of Farah, a muse of this uprising that became widespread in the country. That would have pleased the crowds. But that was not Leyla Bouzid's project: Instead, As I Open My Eyes highlights the distress of this life impulse that is cognizant of its force but has not yet been able to identify with a mass movement and is confronted on all sides by organised surveillance, compromises, betrayals, and repression. The film is at the fore of this youth of which Leyla was a part, in a Tunisia confined within a dictatorship that put a cop behind every tree, stuck in self-censorship and paranoia. "From boredom nothing escapes," sings Farah, out of frustration. She sings against everyone, her mother (remarkably played by the singer Ghalia Benali) who, concerned as much about the consequences as the authority, does not tolerate any defiance. And this circle will gradually close in on her.

And yet, the film is not Manichaean: fearing the consequences, everyone feels in their guts the dilemma of compromise. How to create without losing one’s soul? Each adult must negotiate in order to protect the fragile Farah. This is the truth that is at issue, the harsh reality of the dictatorship: between ideal and responsibility, the journey is full of pitfalls. To recognise this tension is the crux of the film project, as it is a very timely subject. It is by being fully aware of what has been, of its compromises as well as its desire for life that a society can emerge from a dictatorship without the illusions of revolutionary prophecy and its inevitable disappointments.

To achieve this consciousness without discourse, by plunging into the complexity of each character with nothing to hide their contradictions, is the success of As I Open My Eyes. The whole film is designed within this genuineness, the youth are amateur musicians, and the rehearsals as well as the concerts were shot without playback, the casting was made according to the expressiveness of the people and the dialogue rewritten extemporaneously, with the range of Sébastien Goepfert’s camera giving them the required space. Without folklore, the music of Iraqi Khyam Allami is accompanied with the energy of Tunisian popular music and electric rock. The acting of Baya Medhaffar (Farah) captures without overstatement its vital force but also its disorder in the face of adversity and the concessions of each.

This is what allows the characters to come out of powerlessness. It means to go in search of their beauty, to really love them: this film condemns no one, to the contrary, it draws from each a profundity of humanity, a dignity, even in the most compromised. For it is not in the Manichaeism that a country advances, but in reconciliation with itself, and hence with its past. It is in this condition that, as with the poet-singer Marwan in Youssef Chahine’s Destiny who the obscurantist forces wanted to assassinate, one can still sing.