“Woman to Woman” (2013) by Malika Franklin and Véronique Doumbé 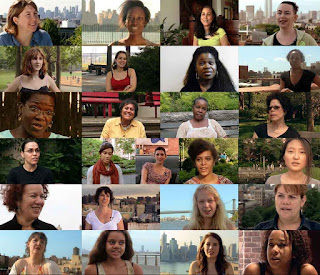 Woman to Woman by Malika Franklin and Véronique Doumbé.
In the original post the African Women in Cinema Blog highlighted African women's films accessible online during the Directed by Women worldwide film viewing party - 1-15 September 2015.
While the website no longer links to a source that streams the film, it continues to provide valuable information about Woman to Woman as well as educational performance viewing details.  See: http://womantowomanmovie.com/
Daughter Malika Franklin and mother Véronique Doumbé teamed up to make Woman to Woman (2013), a documentary film exploring the experiences of mothers and of daughters living in New York City.

Woman to woman stands out in many ways, the treatment of the subject, the filmmaking process whereby Véronique Doumbé and her daughter Malika Franklin film other mothers and daughters, and the online view-on-demand distribution strategy, which provides an opportunity for a worldwide audience to experience the English-language film.

From the Woman to Women Press Kit:

The idea of Woman to Woman grew out of discussions with mothers of teenagers about issues relating to being a woman or becoming one. Producing Woman to Woman is exciting because it touches two areas that matter most in my life, being a mother and making films.


I joined the film after my mother had already begun because I felt it was important to have a teenager's perspective. The film's intention is for mothers and daughters to better understand each other and to have open conversations. This could not be done if the conversation was told only through a mother's eyes.
Posted by Beti Ellerson at 14:50