B for Boy by Chika Anadu on Netflix 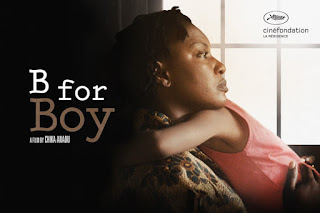 B for Boy (2013) by Chika Anadu is accessible on Netflix

B For Boy is a contemporary drama set in Nigeria, about one woman's desperate need for a male child; which reveals the discrimination of women in the names of culture and religion.


Chika Anadu was born in Lagos, Nigeria in November 1980. She attended school there before going to the UK in 1997 where she did her 'A' Levels, got her first degree in BA (Hons) Law and Criminology, and an MA in African Studies: Human and Sustainable Development. Having always been an avid film buff from childhood, and having fallen in love with foreign Language/Arthouse films during her Masters degree, it wasn't until 2006 that Chika realized that she wanted to be a Filmmaker. She moved back to Nigeria for good in 2008 to work in TV/Film production. (From Cannes Résidence Website)
Posted by Beti Ellerson at 13:42