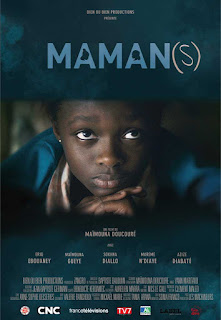 TALENTS EN COURT (Talents in Short). With her second short film Maman(s), 30-year-old Maïmouna Doucouré discusses the upheaval of polygamy through the eyes of a child.

After the premiere of her short film Maman(s) at the UGC Ciné Cité 19 in Paris, she glows, having gathered nearly 300 viewers and amassed as many reactions. Maman(s) was presented within the framework of Talents en Court initiated by the CNC and the association Friends of the of the Comedy Club. With the film Maimouna Doucouré knew she was confronting a taboo subject: polygamy, out of which she was "born" and by which she was inspired. "For me it's a film about love, and how a little girl interprets this love through her parents."

Although tolerated in some countries and prohibited in France, Maimouna Doucouré testifies that all around her this is a “common” practice, leaving more scars than one may imagine: "some of my friends have been damaged by polygamy because the children are not at all considered. Until one day it shows in their grades or they begin to act out. There is a real problem of communication in many families."

Born in Paris in 1985 of Senegalese parents, her mother, a shopkeeper and her father, a garbage collector, Maimouna Doucouré experienced a "beautiful" childhood full of "laughter and adventure". In the middle of a family of ten children, she is the fifth. She qualifies the 19th district of Paris where she grew up, as a true "melting pot", oscillating between "stressfulness and kindness."

A good student, "I was lucky to have parents who put a great emphasis on education even if they themselves did not go to school". Maimouna Doucouré took acting classes given by an organisation; then she wanted to follow an S academic track. "Are you crazy? It's too hard!" say her friends and career counsellors. "Since then, the more I am told that something is impossible, the more I go towards it," having obtained the baccalauréat in the subject matter she desired.

Though she earned a degree in Biology from the University of Paris 6, Maimouna Doucouré realised that something was missing. The need to express herself: "I have always thought that ‘perhaps one day’... I knew that the things within me had to come out." Ever since childhood, with her older brothers, she consumed films, on television or VHS: "Scarface, The Godfather, Boyz N the Hood, Freddy... It is with them that I discovered cinema."

Determined not to miss out on her calling, Maimouna Doucouré worked to absorb her experiences at the Laboratoire de l’Acteur (Laboratory for the Actor) in the 11th district of Paris (350 € per month!) where she trained in acting. Then by chance she learns about a call for applications at the HLM sur Court(t) Festival. In two days, the text is written and sent. Some time later, the phone rings. Winner. "I told myself, this is a sign. Then I asked myself: how is a film made?".

After calling friends and searching for information on the Internet, Maimouna Doucouré manages from A to Zed the shooting of Cache-cache (Hide and Seek) a short film with ten children, which won the third prize at the HLM sur Court(t) Festival and Special Mention from the Jury at the Generation Court d’Aubervilliers.

During another festival, she met the Bordeaux-based director and producer Zangro who offered to produce her next short film. "He encouraged me a lot. With him I realized that it is when you think your script is finished that the work begins." Together, they amassed the support of CNC, France 3, TV7 Bordeaux and the Region Aquitaine to shoot Maman(s).

If this believer of unlimited possibilities appreciates In the Mood For Love, La séparation, Breaking the Waves, Incendies, Les 400 coups, Amélie Poulain or Welcome, the representation of the minority populations in French cinema seems to be lagging behind. "In films, black people still play the roles of nannies, maids... And outside of cinema, they are still doing advertisements for condoms, AIDS... As if we did not eat yogurt. If all minority groups one day stopped being consumers, people would realise that they do exist."

So, to make films, not "films of the..." Maimouna Doucouré aspires to make films "that are thought provoking," with actors "beyond stereotypes", that in France one day it is possible to "make things happen and create that which does not exist".