For more information on the Indiegogo campaign and to make a contribution: https://www.indiegogo.com/projects/one-week-two-days-short-film

Marwa Zein had this to say to Beti Ellerson about the film project "One Week, Two Days".

Relationships, people, fear, time. Is time against love? Our film is about love, time, sharing, communication and anxiety. A film that spans a nine-day period and what may happen to any couple during that time. A film about different points of view that are not discussed because it happens all the time. 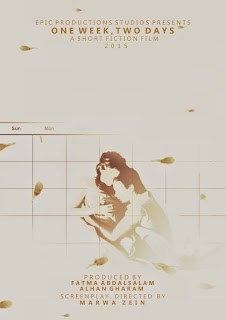 Love scenes are hard to make, and going through intimate details between a man and a woman is very difficult. And what is even more difficult is to find someone who is willing to finance it, especially when it's a short film. But it is not difficult to find people who are interested and willing to help us make the movie. We are proud that almost half of the crew are women. And we are happy that the other half are men: in order to oppress them! We are happy to work together on a film that could be about any couple anywhere in the world.

Sudanese filmmaker and scriptwriter Marwa Zein was born in Saudi Arabia and lived in Cairo, Egypt. After studying chemical engineering for three years, she decided to pursue her passion for film at the High Institute of Cinema in Cairo, graduating with an honorable mention in 2009.

Nine days between a loving couple from the Middle East, where intimacy and relationships are hard to discuss in real life and in films.

In a sarcastic yet romantic way, the film relates very small though important details that happen between a woman and a man; which is something relatively new to the Arab short film industry.

As filmmakers we are bound by market requirements and rules, and as Arab artists we are always hounded by constant censorship that thwarts our imagination and redefines our words.
We want to make films based on our own desires: that are true, free and our own!