Support a documentary film about the Gabonese deaf football club! 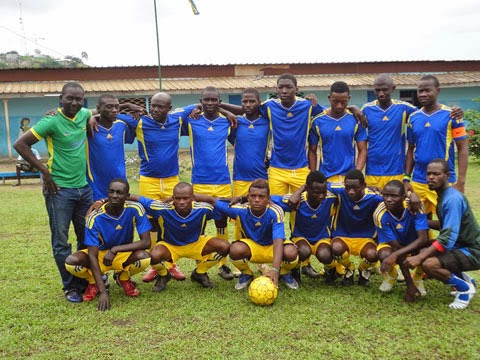 English (translated from French by Beti Ellerson, the Indiegogo webpage):

Documentary filmmaker Yveline Nathalie Pontalier, who was born in 1985 in Libreville, Gabon, completed a professional Bachelor in image techniques with a focus on techniques of cinematography (HELB, former INRACI) in Brussels. Social exclusion issues are recurring themes in her films.

What are the daily experiences of deaf people who try to make themselves understood? Few people know sign language. In Gabon, some deaf people themselves are not fluent users.

In Libreville, ASMG (Association of Gabonese deaf people) is an association of deaf people that has existed for 27 years. Within the ASMG the football team, “Le club des silencieux de Libreville” (The Silent Club of Libreville), trains with the dream to participate one day in the Deaf World Cup.

Issues regarding social exclusion are recurring topics in my film projects. These choices are driven by my personal background, my environment, and the desire to listen to people to whom no one else listens; allowing them to express themselves by showing the complexity of their lives beyond stereotypes.

Gabon is a society where speech has a central place. How, in this context, do those who cannot make themselves understood, communicate with the outside? How does one construct an identity and integrate into the culture, family, society? If this issue of communication can be highlighted by the importance that speech occupies in Gabon, the integration of deaf people in society remains a collective necessity and the evolution regarding the deaf community, inevitable.

When I arrived in this community, I quickly understood the power of the hierarchy within the association. Also having to rely on the interpreter, I first met the representatives of the association and then the men. They showed me the environment and the activities of their association. They then invited me to their home, a squat that they have occupied for the past several years. It was at this same time that I met, for the first time, some of the members of the soccer team, "The Silent Club of Libreville."

My interest was then quickly drawn to this soccer club that brings out the strength of deaf people and their capacity to be on par with hearing people. Once again I found this force in sport through the physical interaction with the hearing community, hence, ones ability is ultimately guided by his/her own talent. Through a universal sport, this documentary will provide the opportunity to bring the hearing public’s attention to this disability.

The soccer team will be the point of departure to explore the lives of deaf people: work, family, ... but also to observe how men construct their identity in a patriarchal society, which expects them to have no imperfections.

This community is a microcosm in its own right. A microcosm of Gabonese society which, although living on the margins, shares the daily realities of the Gabonese; the difficulties are compounded by their disability.

In addition, I will show the difficulties with the so-called "normal" society in relation to culture, family, school, work... Marginalised, sometimes excluded, I will illustrate the disability as a relational and personal barrier. The opportunities to act and perform are sometimes thwarted; dreams and projects limited to the reality of their environment.

My place in the film:

As with my previous films, my working approach has been to introduce myself to the inner world of deaf people, both in their professional lives and in their social spaces. For the detailed description of their daily life, I will endeavor to understand the challenges they face and the strategies they might implement to integrate into the hearing world.

As a hearing person my relationship with deaf personalities brings me back indirectly to the subject. Having had difficulty myself in communicating directly with them, to me it seemed indispensable to learn the theories of sign language before shooting.

During the first location research, I let myself be guided by the events and gave as much space as possible to the participants of the film.

The impact of the film

The team’s mission:  to give the film the widest visibility possible!

You cannot support us financially? That does not matter! Help us by talking about the film to your friends and colleagues! Our project needs you! Make our Dream Yours!

For more information on the Indiegogo campaign and to make a contribution: https://www.indiegogo.com/projects/le-club-des-silencieux