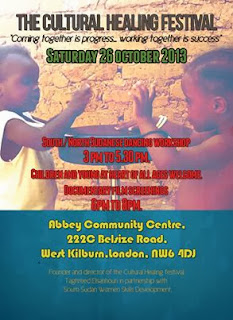 The Cultural Healing Festival is conceived to carry on the legacy of the Cultural Healing project that was originated by filmmaker Taghreed Elsanhouri. Cultural Healing was a EU funded cinema for peace building and community transformation initiative designed to empower ordinary people in Sudan to find their creativity and their voice and to use these to break the silence on taboo issues at the local and the national level. Eight short films by communities across Sudan were made through the project.

Taghreed, please give a bit of context regarding The Cultural Healing Festival.

The Cultural Healing Festival was envisioned as an annual event that would continue and build upon the legacy of the project.  The first edition of the festival was launched in Khartoum in January 2013.  With the recent clampdown on media and artistic activities in Khartoum I realized it might not be possible to sustain the festival as an annual event. However, there are significant Sudanese and South Sudanese diaspora in the UK, Europe and the US and so the idea to create an annual diaspora event emerged.

The London diaspora edition was recently held on 26 October, what are its objectives?

The objective of the diaspora edition is to bring people of the two Sudans together in a spirit of cultural exchange. I think in diaspora the people of the partitioned Sudans experience their differences from a more expansive vantage point, here they are both ethnic minorities and may experience marginalization and discrimination. On the positive side they live in free democracies and have the opportunity to express themselves openly and without fear.

There is a Sudanese proverb that says ‘words are more beautiful when they are spoken out of the mouth of the person they concern.’ In diaspora a new generation is emerging which has the education and the self-knowledge to facilitate the peace back home and it is time that they are mobilized and empowered to make their contribution.