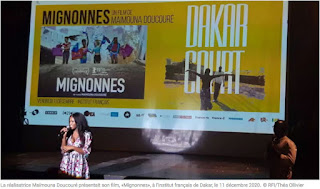 In the film Mignonnes [Cuties] eleven-year-old pre-teen Amy discovers in her new elementary school a group of dancers called: “Les Mignonnes”. Fascinated, she begins a sexy dance, the twerk, hoping to join their band and escape a family upheaval.
The audience discussion of the film screening at Dakar Court, offers a Senegalese perspective of the bi-cultural theme explored by the bi-cultural filmmaker.
The following discussion is based on the report by Théa Ollivier of RFI*
During the Dakar Court audience discussion, Maïmouna Doucouré had this to say:
When looking at tradition and society there is a pressure imposed on women to present themselves in a certain way in order to please men, and that is the common characteristic representative of patriarchy.

Malik Diouf, who attended the screening, found the film to be fantastic "with issues such as polygamy to be important points of reflection for our society. The film is right on point."

Professor and scholar Magueye Kassé, also in attendance, found the film to be very strong and refreshing with many lessons to learn. "The film challenges us, both adults and Senegalese. It settles the debate regarding the religious aspect which dictates to women: you must always be in a position of submission, and accept the unacceptable."