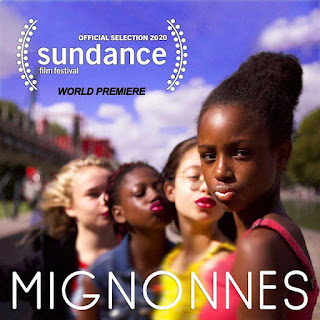 Synopsis
Eleven-year-old pre-teen Amy discovers in her new elementary school a group of dancers called: “Les Mignonnes”. Fascinated, she begins a sexy dance, the twerk, hoping to join their band and escape a family upheaval.

The U.S-generated controversy around the film moved the filmmaker to proactively counter the whirl of rightwing untruths and conspiracy-theories by people who have not seen the film, describing it as inciting child pornography and pedophilia. Already on the screens in France since August with no fanfare, it is set to be released in the United States by Netflix in September, against a campaign to remove the film from its streaming service.

The U.S.-made controversy was self-induced by Netflix itself, choosing to promote the U.S. release with a poster, very different from the French one, of the young protagonists scantily-clothed in sexually provocative poses.

One of her discussions of the film and why she made it appears in the Washington Post Opinions section. She introduces it by talking about what triggered her interest in the subject.

I was at a community event in Paris a few years ago when a group of young girls came on the stage dressed and dancing in a very risque way. They were only 11 years old, and their performance was shocking. Curious to understand what was happening on that platform, I spent the next year and a half interviewing more than a hundred 10- and 11-year-old girls across the city.

The result was my movie "Mignonnes," or "Cuties" in English. I wanted to make a film in the hope of starting a conversation about the sexualization of children.


ALSO SEE: Why I made cuties. Interview with Maïmouna Doucouré