Rahel Zegeye: The Experiences of an Ethiopian Migrant Worker and Filmmaker in Lebanon 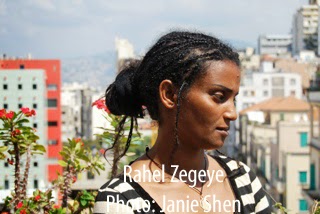 Rahel Zegeye from Ethiopia, talks about her passion for filmmaking and her desire to tell the experiences of Ethiopian migrant workers in Lebanon, where she lives and works.

Janie Shen of Migrant Workers Task Force has this to say about Rahel Zegeye: "A very talented and unique woman, she is most probably the one domestic worker in Lebanon (or the world?) who has put all her savings and free time to filmmaking."

Rahel, you have been living and working in Lebanon for some years and made the film Beirut focusing on the experiences of a group of Ethiopian migrant workers living in Lebanon. What brought you to Lebanon and what inspired you to make the film?

Please talk a bit about the plot of the film.

The story centers on Hiwot, Z, Zufan, Misir, Saba and Hana who are friends but lead very different lives. Hiwot, left her employer’s house a long time ago and started a life earning a living as a prostitute. She parties, smokes and drinks and seems very happy and free. The story starts when she wants to find a co-worker, another girl who could satisfy her clients (mainly Sudanese workers). Saba, still a housemaid, complains about her ‘madam’ and wishes to run away. One day she takes the courage and joins Hiwot in her free life, much against the objections of her two good friends Misir and Hana. Misir and Hana, both working as maids, represent the ‘good girls’ in the story. Although Hana is being mistreated by her madam she does not want to run away and join the ‘naughty girls’ but just wishes to return home to her country. The lives of the girls get intertwined once Saba, encouraged by Hiwot, goes and lives with an Ethiopian man named Yared. Yared is in fact married to Zufan, but is not a man to be trusted.

Why did you decide to make the film?

My main aim with the film was to show a different perspective on the lives of Ethiopian workers in Lebanon. We often hear stories of abuse and bad treatment of Lebanese employers towards their foreign domestic workers (maids). Most media and organizations working to help migrant domestic workers (MDWs) in Lebanon portray the worker as a helpless victim, her fate ruled by evil agencies and bad madams. Although this often does happen and is definitely an issue that needs attention, reality is much more complicated. I want to shed light on the inner lives and thoughts of a domestic worker, an aspect which is usually hidden from the Lebanese and foreign public.

Many Ethiopian MDWs who come to Lebanon decide to run away from their employers. Some do this due to real reasons of mistreatment, others don’t. They might be tempted to leave the boring household chores and duties at the employer’s house for a ‘freer’ existence. Once they leave the employer’s house and break their contract they do not have any documents and are illegal to stay in Lebanon. More than often they will choose to sell their bodies for a living whilst enjoying their freedom. They live life on the fast lane: drinking, smoking, partying and sleeping with many men usually without any form of protection. The film tackles sensitive topics such as morality, prostitution and HIV/AIDS. These are important issues that need to be brought into attention to both Ethiopian women in Lebanon but also back in Ethiopia, before they decide to go work in Lebanon. MDWs need to understand the risks that are involved when you runaway from an employer. Although many employers are difficult to live with and work for (and some outright impossible), the truth is that they still offer some protection against the risks of the outside society.

You have put forth a tremendous effort to make the film and have incurred distribution difficulties. How did you develop an interest in filmmaking and what was the process of making the film.

I started working on the film in 2004 and it was finished a few months before the July 2006 Israel War. Before making the film, I showed my script to the church as well as the Ethiopian embassy in Lebanon and they approved it. The editing and finishing was done in Ethiopia with the support of Alem Tilahun (Haile Gebrselassie’s wife). Alem was very supportive of my project and would have liked to help me distribute it. However, once I returned to Beirut with the finished film the embassy did not want to give the final approval for distribution. This has stopped the process of showing my film to a wider audience back in Ethiopia, which is my main target audience for this film.

All the actresses and actors in the film are migrant workers from Ethiopia and Sudan. Both my sister Hiwot and I have attended drama and acting school when we were younger. As domestic workers we only have Sundays off, so we could film only on Sundays. It took two years to finish the filming. During this time I put in all my earnings to produce the film.

What has been the reception of the film by the public as a whole and more particularly the Ethiopian migrant workers in Lebanon?

The film has not been seen by the public because I do not have the means nor anyone to assist me in Lebanon as the country is in continuous strife and war.  After the failed attempt of getting Beirut to be approved for distribution, I encountered my own troubles. I had a residence problem for some years because my boss left the country during the 2006 war, leaving me homeless and without any legal documents. Now I have a new boss and I am legal. And I have found a good employer who supports my filmmaking.

What is your relationship with Ethiopia and Ethiopians in the larger Ethiopian Diaspora?

My relation with Ethiopia? Well my parents are there and I continue to keep in touch with them. As for the Ethiopians in Lebanon, I do my best to help them, but it is not easy, since most of them have problems with their employers.

You have expressed an interest in producing a dramatic, fictional web-series about the lives of a group of Ethiopian women in Lebanon along the same line as the film, how do you envision this?

I have many ideas and hope to begin a new project but this time I would need real funding and support from a wider public. I hope with the support of organizations like Migrant Workers Task Force, we can make this happen!

A special thanks to Janie Shen and Alex Sham who assisted me in arranging the interview, and Janie with language communication. They are founding members of Migrant Workers Task Force (MWTF) who got to know Rahel and about her film aspirations during a language class initiative for migrant workers that they set up in Beirut. MWTF is an initiative that supports migrant workers from many countries around issues on education and awareness-raising about the rights of migrant workers in Lebanon.

Since this report there has been an outpouring of interest and support for Rahel Zegeye and her cultural projects from around the world.

During the past three years Rahel Zegeye's work and advocacy for the rights of migrant domestic workers have become increasingly visible. In 2013, she wrote, directed and produced the play “Shouting without a Listener”. The play relates the experiences of Lily, a migrant domestic worker, who fights against discrimination in Lebanese society and the inefficiencies of the Ethiopian embassy in dealing with these issues. In addition, she created the non-governmental organisation, Mesewat to raise awareness about migrant working conditions in Lebanon and advocate for them to be protected by law.

[i] Rahel Zegeye: The Experiences of an Ethiopian Migrant Worker and Filmmaker in Lebanon
http://africanwomenincinema.blogspot.com/2011/09/rahel-zegeye-experiences-of-ethiopian.html
Posted by Beti Ellerson at 06:03

Great to read that an Ethiopian domestic worker made a film! Together with a filmmaker I made a short documentary about Ethiopian and Somali domestic workers in Yemen, with the same intention as Rahel, to show the broader picture and not only the abuse. Thanks for this interview, and good luck with your work, Rahel. Greetings from Amsterdam, Marina de Regt