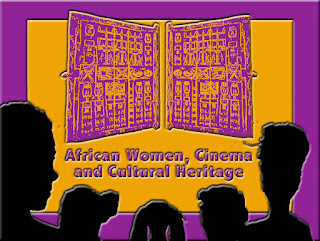 African women, cinema and cultural heritage
African women screen practitioners have played an important role in the promotion and preservation of African cultural heritages. Moreover, their engagement as cultural producers of screen culture ensures the visualization of the vast cultural treasures of the African continent. For Sarah Maldoror (1929-2020), this was the leitmotif of her filmmaking practice: "I play a cultural role as filmmaker. What interests me is to research films about African history, because our history has been written by others, not by us. Therefore, if I don't take an interest in my own history, then who is going to do it? I think it is up to us to defend our own history, to make it known—with all of our qualities and faults, our hopes and despair."

Seipati Bulane Hopa, Secretary General of FEPACI from 2006 to 2013 highlighted the significance of African cultural heritage in her tribute to Rwandan producer Chantal Bagilishya:
"Chantal’s passing [in 2009] and that of others before her should not be in vain. The recent flooding of the library at the FESPACO took us by shock, the damage and loss that it incurred offers a powerful metaphor that evokes and invokes a greater consciousness of creating a future that is founded on pillars of prosperity - for procrastination is known to be opportunity’s natural assassin. We must aspire to that which necessitates measures that compel us toward creating tangible tools that help us create an infrastructure that is robust and responsive in managing African audiovisual cinema institutions.

It is through the loss of our talent, the passing on of our most militant of our creative force that we must recharge our creative, intellectual energies, sharpen our creative weapons and compel change by looking at change with a different eye and an approach that compel us to be the change we want to see and be."

Ghanaian filmmaker Anita Afonu's passion for the preservation of Ghana's cinematic history inspired her film Perished Diamonds, which relates the history of Ghanaian cinema, and the initiative to restore its hidden and lost legacy. Her motivation was twofold, as a film school graduate she had a personal obligation to preserve Ghanaian cinema, and as a citizen of Ghana to uphold the ideas of Kwame Nkrumah. She had this to say in our interview: "Former President Nkrumah believed that the medium of film was a very important tool to change the mentality of the Ghanaian if he was going to make any changes as president. He believed that by showing films made by Ghanaians and shown to Ghanaians, that it would boost their self-esteem and encourage them to work for the better Ghana that he had set out. As president Dr. Nkrumah laid the groundwork for Ghanaian cinema..."

For Marie-Clémence Paes, Franco-Malagasy filmmaker/producer, the role of oral tradition is a point of departure in their work: "All of our films have always been based on the knowledge transmitted by oral cultures. The central idea being that there are treasures that are transmitted from generation to generation by word of mouth that are never written down, and they should not be neglected or looked down upon."

Sara Gubara journeyed into cinema through her father, Gadalla Gubara, pioneer of Sudanese cinema. His sudden blindness thrusted her into the forefront, she became his eyes. She has been determined to keep filmmaking alive in Sudan: “I love cinema and because of my father...I don’t want this to die.”

In their work, Cameroonians Marthe Djilo Kamga and Frieda Ekotto center the role of women as artists and cultural activists in the context of knowledge production. African women makers are the “primary sources” of their study and research--their voices and the relating of their experiences inform the project Vibrancy of Silence.

Through cinema, Liberian activist Pandora Hodge hopes to bring culture back to the country after the devastation of civil war. In 2017, she founded Liberia's first Art-House Cinema based on the dreams of young people, that youth entrepreneurship and culture are powerful tools for positive change.

In his article "Women and Intangible Cultural Heritage: the practice of the 'creative' documentary film in sub-Sahara Africa", Bertrand Cabedoche invokes the "Convention for the Safeguarding of Intangible Cultural Heritage", signed by UNESCO, which designating “the practices, representations, expressions, knowledge, skills – as well as the instruments, objects, artefacts and cultural spaces associated therewith – that communities, groups and, in some cases, individuals recognize as part of their cultural heritage.” (art. 2.1). Through their films and activism, African women screen practitioners uphold these ideas and the promotion African cultural heritages.
Report by Beti Ellerson
Following are relevant articles on practices of cultural heritage on the African Women in Cinema Blog:
Femme, cinéma et valorisation du patrimoine culturel au Cameroun | Women, cinema and the cultural heritage preservation of Cameroon - Conférence
https://africanwomenincinema.blogspot.com/2021/03/femme-cinema-et-valorisation-du.html

Marie-Clémence Paes: “there are treasures that are transmitted from generation to generation by word of mouth”
https://africanwomenincinema.blogspot.com/2012/12/marie-clemence-paes-there-are-treasures.html

Women and Intangible Cultural Heritage: The experience of the “creative” documentary film in sub-Sahara Africa
https://africanwomenincinema.blogspot.com/2012/09/women-and-intangible-cultural-heritage.html

Rahma Benhamou El Madani: "I try to connect to my roots through my films"
http://africanwomenincinema.blogspot.com/2012/01/rahma-benhamou-el-madani-i-try-to.html

Women and Intangible Cultural Heritage: The experience of the “creative” documentary film in sub-Sahara Africa
http://africanwomenincinema.blogspot.com/2012/09/women-and-intangible-cultural-heritage.html

Rama Thiaw a filmmaker in the Struggle
http://africanwomenincinema.blogspot.fr/2011/09/rama-thiaw-young-filmmaker-in-struggle.html

Chantal Bagilishya: "Special Tribute to one of Africa’s treasures in the world of cinema" by Seipati Bulane Hopa
https://africanwomenincinema.blogspot.com/2009/10/seipati-bulane-hopa-chantal-bagilishya.html
Posted by Beti Ellerson at 05:59