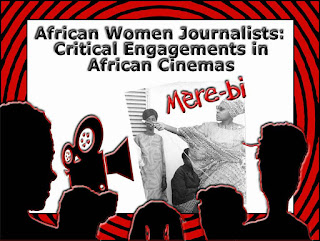 At the eve of African cinemas south of the Sahara, African women journalists have been at the forefront of film criticism and activism in the development of a cinema culture on the continent and the diaspora.

Senegalese Anne Mbaye d’Erneville studied journalism in Paris in the 1950s, returning to her country at the eve of independence to found a variety of cultural bodies among which include a cinema culture that has laid the foundation for contemporary cultural infrastructures. Her influences in cinema culture have spanned radio, print and television journalism and beyond. The emergence of the Dakar-based French-language women’s magazine, Awa, initially launched by Annette Mbaye d’Erneville in 1957 under the name Femmes de Soleil is an example of the early engagement of African women at the intersection of gender and culture. The first written works regarding African women in film were journalistic in nature, with photographs and short profiles of women television presenters and the first African actresses of the nascent African cinema. These reports published in 1966 and 1972 were included in the Senegal-based French-language women’s magazine Awa, la revue de la femme noire (1964-1973).

Moreover, Annette Mbaye d’Erneville was the director of RECIDAK, Rencontres cinématographiques de Dakar for many years. An annual film festival that she initiated in 1990 and with which she continues to have close ties. The 1996 edition of RECIDAK, Femmes et Cinéma (Women and Cinema) paid homage to African women. She was also a founding member of the Association Sénégalaise des Critiques de Cinéma (ASSECCI) created by filmmaker and critic Paulin Soumanou Vieyra and journalist Djib Diedhiou. Also one of the founders of the women’s movement in Senegal, Annette Mbaye d’Erneville’s pioneering feminist voice reverberates within diverse cultural milieux, notable cinema, where she has been a seminal figure in the development of the Senegalese public as cultural readers.

Cameroonian Thérèse Sita Bella (1933-2006), who held many functions as a journalist, is most widely known for Tam Tam à Paris, a 30-minute film that she directed in 1963; documenting the National Dance Company of Cameroon during its tour in the French capital. After the production of the film, while in France, Thérèse Sita Bella continued her work as journalist during which she participated in the creation of several African-focused cultural initiatives. She returned to Cameroon in 1967, working in various culture and cinema related positions.

Amina le magazine de la femme africaine et antillaise, also a French-language magazine, created in 1972, initially based in Dakar and later in Paris in 1975, has an early and present history of featuring profiles and interviews of filmmakers, actors, producers, stakeholders and other professionals in cinema. In its pages, Guinean editor-in-chief Assiatou Bah Diallo has played an important role in the promotion of women of the moving image.
Algerian Horria Saïhi is perhaps best known for her indefatigable work as journalist, reporter, and filmmaker against government censorship and religious fundamentalism. She was a 1995 laureate of the "Courage Award" presented by the International Women's Media Foundation.
Jihan El-Tahri worked for sometime as a journalist for many prominent news agencies but gradually found her interest in documentary filmmaking as a means to explore her subject more deeply. She had this to say about her move towards the documentary:
"I realized that as journalist we do not have the time to look into what is actually happening. We have deadlines everyday so you just skim the surface constantly and you don’t get to the bottom of what this is all about. And that is why I chose documentary.  Because documentary was about taking the time to look into a topic that is close to your heart and really looking at it in an angle that you choose. And doing the research and taking the time and formulating it in a way that is your own expression. Where as a journalist, there are so many constraints in terms of space, the number of words, when your editor wants it, who’s going to edit it back there. So this was not what I was looking for. What I was looking for was a mode of expression and that I obviously didn’t find in journalism."
Throughout the continent a cohort of women are actively engaged in film journalism following the footsteps of these trailblazing women who have come before them. The African Women in Cinema Blog has featured several of these journalist activists:

Hortense Assaga created the magazine Cité Black Paris, hosts several cultural programs and regularly reports on cultural events for Africa 24 and Canal+ Afrique. Togolese film critic Sitou Ayité wears multiple hats as producer, scriptwriter and director. Amina Barakat from Morocco, navigates the local film culture scene as well as throughout the continent. Franco-Burkinabé Claire Diao traverses an array of transmedia networks: podcasts, audio-visual programming, itinerant film curation, and diverse print media. Cameroonian journalist Stéphanie Dongmo, blogger, president of the Cameroon chapter of CNA, Cinema Numerique Ambulant, the extensive network of mobile cinema in Africa and Europe, is also a novelist. Falila Gbadamassi, journalist, film critic and social media editor, informs and wants to be informed about Africa in particular. From Nollywood to Bollywood via Hollywood, she is both a film enthusiast and critic. She writes for Africiné Magazine (Dakar), among other media. France-based independent journalist Amanda Kabuiku collaborates with several publications. Belgo-Congolese Djia Mambu keeps a visible presence at the important network of African film festivals, Cannes and beyond. Cameroonian journalist and film critic Pélagie Ng'onana is an editor at the Dakar-based Africiné Magazine and collaborates with the Yaoundé-based cultural revue Mosaïques. Domoina Ratsara from Madagascar is president of the Association des Critiques Cinématographiques de Madagascar (ACCM) which she co-founded in December 2018Senegalese Fatou Kiné Sene is general secretary of the Senegalese Film Critics Association. The goal of Senegalese Fatou Warkha, creator of the online television channel Warkha TV is to change attitudes and laws, giving a face and voice to everyone who has been forgotten by the authorities.
Report by Beti Ellerson
Following are articles published on the African Women in Cinema Blog by this growing cohort of journalists. (The post will be updated to include additional names and links).
Regarding Anne Mbye d'Erneville: https://africanwomenincinema.blogspot.com/2010/09/annette-mbaye-derneville-mere-bi.html
Regarding Thérèse Sita Bella: https://africanwomenincinema.blogspot.com/2010/10/foremothers-in-african-cinema-therese.html
Regarding Horria Saihi: https://africanwomenincinema.blogspot.com/2010/01/horria-saihi-portrait.html
Regarding Jihan El-Tahri: https://africanwomenincinema.blogspot.com/2010/11/tete-tete-with-jihan-el-tahri.html
Hortense Assaga
https://africanwomenincinema.blogspot.com/2020/06/conference-du-pavillon-des-cinemas.html