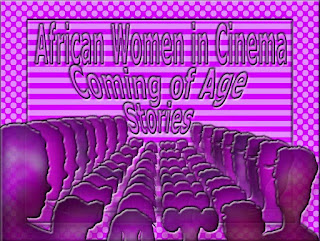 African Women in Cinema :
Coming of Age Stories
Stories of the coming of age experiences of girls throughout their adolescence are among a range of compelling films by African women in cinema, visual media and screen culture. Discovering their bodies, sexuality, love; growing into their own identity; in search of independence from the impositions of family and society, these films span a range of intimate and dramatic storytelling.

Coming-of-age moments explore a diversity of themes: from traditional initiations to rituals passed on from generation to generation; from a traumatic life-altering event to soul-searching and self-discovery. This transition phase may be influenced by a life-changing circumstance that would change the trajectory of a girl's life such as the death of a parent, or other dramatic changes in the family, an encounter with a person who serves as a mentor, or an experience that transforms her outlook on the world. While these situations may take place at any point on the timeline of one's life, its influence during adolescence has a profound impact on an already-developing personality.

Safi Faye's Mossane (1996) was inspired by her daughter who at the time of the film's conception was 14 years old--moment that she describes as a magical age: "When you have a fourteen-year-old daughter her changes are visible to you; each photo is different from the others, yet the girl is always the same. There are transformations that a mother perceives in her daughter at that age. This is what I wanted to sculpt. I wanted to recreate a beauty that exists only at this age. Afterwards, she would be too old; before, she was too young. Before, she did not respond, and after that age of fourteen she complains: Mama I don't want this, I don't want that."

Safi Faye's Mossane offers a complexity of coming-of-age moments experienced by the eponymous character. Love, sexuality, rebellion, resistance, morality--all of which Mossane must confront to find her place, to discover who she is--torn between tradition and modernity, "rebellion and effacement".

Moreover, African women's films include emerging adolescent girls on the precipice of discovery and maturing adolescents at the eve of womanhood. Others explore rituals and ceremonies that mark the rites of passage inherent in the coming-age-experience. Ngozi Onwurah's Monday's Girls (1993) comes to mind, which portrays the parallel experiences of two young Waikiriki women of Nigeria as the community prepares for the iria women's initiation ceremony. Florence, embraces the ritual while Azikiwe resists.

In New Eyes by Hiwot Admasu Getaneh, 12-year-old Salem, while at the riverside, stumbles upon a couple making love. Upheaveled by the emotions that this encounter engenders she struggles to understand the sensual feelings and desires that emerge within her.

Other adolescent girls endure the harsh realities of life as they are thrust on their own to find their way alone. Alda and Maria (2012) by Pocas Pascoal, traces the journey of two sisters, 16 and 17 years old as they fend for themselves in Lisbon awaiting their mother who ultimately does not make the voyage from worn-torn Angola.

Machérie Ekwa Bahango's Makila (2018), follows the eponymous 19-year-old, who has lived in the streets of Kinshasa since she was 13 years old. Coming of age in a traumatic and violent existence driven by survival instinct, she decides to follow another path.
As I Open My Eyes (2015) by Layla Bouzid traces the evolving consciousness of 18-year-old character Farah throughout the film, as she opens her eyes to life.

Leïla Kilani's On the Edge (2011) captures the urgency of 20-year-old Badia's desperate search for a life that she can live on her own terms; her need to feel a void in pursuit of an elusive existence, always in a frenzy, ever close to the edge.

In Josza Anjembe's Le Bleu Blanc Rouge de mes cheveux (English title: French), 18 year-old Seyna, born and raised in France in a Cameroonian immigrant family, has a close bond with the country she loves. In acquiring French citizenship she is asserting her own identity, finding herself outside the boundaries of her family, which causes tension with her father.

Woman to Woman, by the mother-daughter filmmakers Véronique Doumbé and Malika Franklin focuses on issues relating to being or becoming a woman. While Véronique directs the camera towards mothers of teenagers girls, Malika draws from the rich and sometimes daunting experiences of daughters living and growing up in New York City.

Nana Hadiza Akawala's coming of age experience at the age of fourteen was inspired by Bibata, the family maid who was ten years older. And yet, she was Nana Hadiza Akawala's friend and confident, and her sudden departure left a tremendous void, shattering something deep inside her. Beyond class, power and age differences--was a friendship, and Nana frames her film (Bibata est partie, 2018) around her journey to find Bibata more than ten years later.

Iman Djionne's film project in development, "Coura + Ouleye" centers on the relationship between 16 and 19 year-old Coura and Oulèye, paternal sisters born into the complex polygamous family in which their respective mothers are co-wives. After the unexpected death of their father they set off to find his will and in the process get to know each other.

These stories are among the many films that explore the diverse experiences of emerging adolescents and soon-to-be adult women. Whether set in Africa or in diverse diasporic locations, the makers endeavor to portray realistic experiences of girls throughout adolescence on the path to womanhood.

Following are related articles from the African Women in Cinema Blog:

Mayye Zayed: Ash Ya Captain | Lift Like a Girl
https://africanwomenincinema.blogspot.com/2020/08/mayye-zayed-ash-ya-captain-lift-like.html

Leyla Bouzid, “A peine j'ouvre les yeux” | “As I Open My Eyes”
https://africanwomenincinema.blogspot.com/2015/12/jcc-carthage-film-festival-2015-tanit.html

Woman to Woman by Véronique Doumbé and Malika Franklin
https://africanwomenincinema.blogspot.com/2015/09/woman-to-woman-by-malika-franklin-and.html