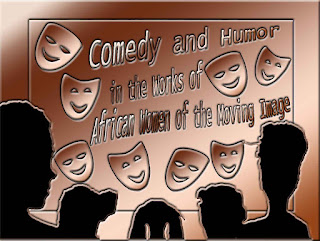 Malian actress Hélène Maïmouna Diarra notes the important role of the Koteba Theatre tradition of the country, which employs satire and burlesque comedy to make critical commentary regarding a variety of societal issues, such as power and gender.

After viewing the Malian film Taafa Fanga at FESPACO in 1997, Lucy Gebre-Eghziabher was convinced that humor has its place in African cinema, that films should not be only about sending messages and exploring politicized issues. During our interview she expressed delight that African films could be funny as well. She realized that there is also a role for comedy even when the topic has significant consequences, such as issues of power, the fight for gender equality, health, and economic survival. For instance, in her short Les pasteques du Cheikh (2019), Kaouther ben Hania's satirical comedy reveals the inner workings of power. Moreover, British-Sierra Leonean has a fascination for "the humor that comes from the many contradictions in our existence and I don't think that you have to be gloomy and preachy about life to make a point."

There is a universal comedy of representations of power, generational and gender conflicts that are easily employed in films with the specificities of each culture.

Fanta Régina Nacro uses humor to interrogate Burkinabé customs, and its relationship between tradition and modernity. In Le truc de Konaté (1998) she deals with the issues around the use of condoms for the prevention of AIDS, and subtly addresses the practice of polygamy. Similarly, Rumbi Katedza confronts social norms and the expectations of tradition with comedy and farce, pocking fun of customs that may be viewed as "outdated" in modern Zimbabwe. In our interview she had this to say about her 2011 film, Playing Warriors: "our lives are full of conflicts and contradictions, and this is what I show in the film, and I encourage audiences to allow themselves to laugh at those realities, reflect on them and challenge them."

Comedy and humor are often employed in web series and sitcom genres, as the lives and drama of the everyday continue from one episode to the next; with intrigue and suspense embedded in the short timeline of events. Akre Loba Diby Melyou guarantees that laughs will abound with the busy-body neighbor in her series entitled Blog. Mary-Noel Niba employs subtle humor in her series Mary and Jane about the good-natured sibling rivalry of two sisters in search of social mobility and job success in the urban city. Aminata Diallo-Glez's Three Women, One Village reveals the gender dynamics within a small village, reversing the plot of the previous comedy series, Three Men, One Village, this time with the women in charge. Dolapo "LowlaDee" Adeleke's wildly popular internet-broadcast films include humor and comedy in its dramatic plots. Similarly, Marguerite Abouet's animation film, Aya of Yopou City is well suited for comedy, while the every day dramas are played out with dancing, reconciliation, wit and humor.

In 2017, FESTICO, the Cameroonian-based International Festival of Comedy hosted a colloquium to explore the role of comedy and its impact on women of the moving image. Thus, highlighting the growing interest of African women towards humor and comedic expression in their work.

Following are related articles published on the African Women in Cinema Blog:

Nicole Amarteifio: Before the Vows
http://africanwomenincinema.blogspot.com/2019/10/ndiva-womens-film-festival-2019-before.html

Awkward is the New Black: A documentary about Senegalese-American Issa Rae
https://africanwomenincinema.blogspot.com/2015/09/awkward-is-new-black-documentary-about_25.html

Email ThisBlogThis!Share to TwitterShare to FacebookShare to Pinterest
Labels: comedy