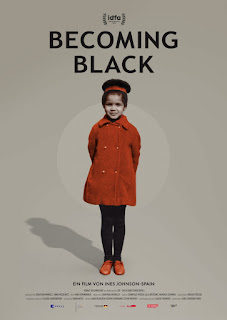 Ines Johnson-Spain
Becoming Black
Togo/Germany
Documentary - 2019 - 91min
Source: https://becomingblack.de/
Image: idfa
Film Africa: Director's Intro [https://vimeo.com/476255772]
Synopsis
A white couple living in the German Democratic Republic in the 1960s, tells their Black child that her skin color is purely by chance and has no meaning. This is also what the girl prefers to believe, until she accidentally discovers the truth as a teenager.
Bio
Ines Johnson-Spain is an independent German/Togolese filmmaker based in Berlin. She studied Scienes of Religions at Freie Universität Berlin (FU) and was a guest student for Fine Arts and Painting at University of Arts Berlin.
She worked for many years as a scenic painter and in various positions of the art departments of national and international filmproductions. (e.g. Peter Greenaway The Tulse Luper Suitcases, Anders Thomas Jensen Men and Chicken, Lana Wachowsky Sense8, Andrej Swjaginzew Die Verbannung).
Posted by Beti Ellerson at 05:33