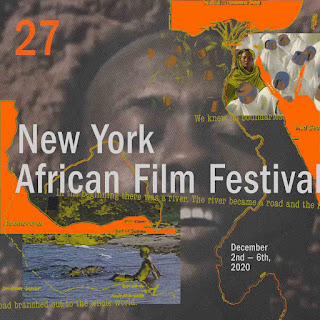 PRESS RELEASE
By Film at Lincoln Center on November 19, 2020
Tickets go on sale 11/23 at https://virtual.filmlinc.org/

Presented by Film at Lincoln Center and African Film Festival, Inc.[https://africanfilmny.org/ ], the 27th edition of the NYAFF runs online December 2-6.

Under the banner “Streaming Rivers: The Past into the Present,” the New York African Film Festival (NYAFF) returns virtually December 2-6 with a spotlight on the cinema of two nations: Nigeria and the Sudan. Presented by Film at Lincoln Center (FLC) and African Film Festival, Inc. (AFF), this year’s regional NYAFF will screen six features and eight short films in the FLC Virtual Cinema, as AFF celebrates its 30th anniversary.

The festival will transport audiences to the Sudan and Nigeria, two nations whose film industries were disrupted in their nascency—in Nigeria by an economic decline in the late 1970s and early 1980s; in Sudan by the dictatorship of Omar al-Bashir, whose 30-year grip on the country was ended by the 2019 uprising. In recent years, Sudan’s film industry has been revived by an emerging crop of filmmakers, who are also dedicated to restoring the works of the veterans on whose shoulders they stand. Nollywood can claim the mantle of being Africa’s homegrown film industry, which has influenced filmmakers globally and provided the template for other nations to jump-start their own nascent motion picture businesses.

The event includes films from some of each nation’s trailblazing directors and latest wave of filmmakers. NYAFF will present two of esteemed Sudanese filmmaker Ibrahim Shaddad’s brilliant works: Hunting Party (1964) and Human (1994). Suhaib Gasmelbari’s acclaimed documentary Talking About Trees captures the efforts of Shaddad and fellow friends and retired Sudanese filmmakers Manar Al Hilo, Suleiman Mohamed Ibrahim, and Altayeb Mahdi—each of whom was trained abroad and whose work was suppressed for decades by Islamist censorship after the 1989 coup—to reopen an outdoor cinema. Among the film’s 12 prizes is the Panorama Audience Award at the 2019 Berlin Film Festival and the Documentary Award at the 2020 Palm Springs International Film Festival.

The Opening Night film is Amjad Abu Alala’s arresting drama You Will Die at 20, winner of the Lion of the Future “Luigi de Laurentiis” Award for a Debut Film at the 2019 Venice Film Festival and Sudan’s first-ever entry for Best International Feature Film, for the upcoming 93rd Academy Awards. In the film, a young man, who the village’s holy man has prophesied will die as he reaches his second decade, turns 19.

Nollywood, the world’s most prolific film industry after Bollywood, was born out of the resourcefulness of creatives working despite economic challenges. NYAFF’s Centerpiece film is the 40th anniversary screening of Kadara (“Destiny”), the debut work of one such filmmaker, the late Adeyemi Afolayan (known as Ade Love), considered one of the fathers of Nollywood. Afolayan wrote and stars in the humorous film, which captures the rivalry between a handsome, charming farmer and a rich brute as they compete in a wrestling contest to prove their worthiness for the hand of the kingdom’s beautiful princess.

In Three Thieves, Udoka Oyeka’s Nigerian comedy, three friends hired to commit a simple theft end up as accidental kidnappers—all while being pursued by the police and the robber whose job they took.

Set in South London, Ngozi Onwurah’s Shoot the Messenger (2006)—winner of the Dennis Potter Screenwriting Award and two BAFTA TV Awards—stars David Oyelowo as Joe, a teacher whose life spirals out of control after he is falsely accused of hitting a student and branded a racist by the local Black community. The film features Daniel Kaluuya in one of his breakout roles.

“Art generally reflects our reality and the evolution of our world,” said AFF Executive Director and NYAFF Founder Mahen Bonetti. “While our programs might highlight the challenges Africa faces, they also illuminate her greatness and her vast contribution to our global cultures!”

The festival also includes a shorts program featuring Zein’s A Game, an adaptation of the Italian short story “Let’s Play a Game,” depicting a confrontation between a divorced woman and her young daughter; Onwurah’s Coffee Colored Children, which speaks to the current moment with its story of two siblings of mixed heritage who, faced with racist taunts, try to scrub their blackness away; and Lande Yoosuf’s Love in Submission, in which a meeting between two Black Muslim women brings a big revelation. Sarra Idris’s My Sister Sara captures Sudanese activist and writer Sara Elhassan in conversation with her brother, ESPN NBA Analyst and TV personality Amin Elhassan, about the 2019 Sudanese revolution and her ongoing activism through social media. Troublemaker, by Olive Nwosu, tells the story of a 10-year-old’s loss of innocence as he hurts his grandfather, reanimating the latter’s traumatic memories of the Biafra War. The program is rounded out by Adé Sultan Sangodoyin’s A Cemetery of Doves, a film about a teenager coming to terms with his sexuality.

This special edition of NYAFF will also showcase a fantastic digital dance piece titled Forever (Brother’s Keeper), choreographed and performed by self-taught Nigerian twins, the Ebinum brothers, in addition to a jam session of catchy Afrobeat tunes spun by the popular DJ mOma at a gorgeous spot in Zanzibar.

This year, AFF is celebrating three decades of promoting African culture through the moving image. Through its signature film festival, traveling series, community engagement programs, outdoor screenings, and new streaming service, the 501(c)(3) brings audiences around the world authentic African cinema from today’s leading and emerging directors, as well as the works of the continent and diaspora’s most esteemed auteurs.

Virtual tickets are $12, and go on sale on Monday, November 23 at noon. See more and save with the NYAFF All-Access Pass for just $60 (a $96 value). Film at Lincoln Center members save an additional 20% on individual rentals and the all-access pass. Learn more at filmlinc.org/AFF2020.