Description
An observational feature length documentary about the female weightlifting community training in the streets of Alexandria, as it follows the 14-year-old Zebiba as she pursues her dream to become a professional weightlifter. Her coach Captain Ramadan believes so much in her and never takes no for an answer. He has been training world champion weightlifters for more than 20 years, including his daughter Nahla Ramadan; the former world champion, an Olympian and the pioneer of weightlifting in Egypt, as well as Abeer Abdel Rahman; the first Arab female 2-time Olympic medalist. For 4 years, Zebiba goes through victories and defeats, including major losses that shape her, as she finds her way from dust to gold. (Source: imdb.com) 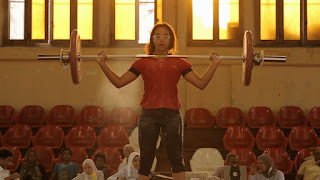