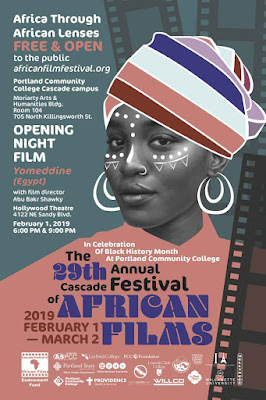 The Cascade Festival of African Films (Portland, Oregon USA), is held during the months of February and March, thus commemorating the U.S. celebration of Black History Month and Women’s History Month, respectively. The closing week of the festival features Women Filmmakers Week, which includes retrospectives, tributes and recently released short and feature film.

The Cascade Festival of African Films shows us Africa through the eyes of Africans, rather than a vision of Africa packaged for Western viewers. The films celebrate Africa’s achievements, expose its failures, and reveal possibilities for a hopeful future. Although the films cannot represent an entire continent, we hope to encourage American viewers to become interested in and study African cultures.

Beauty and the Dog, 2017 by Kaouther Ben Hania(Tunisia) 100in
During a student party, Mariam, a young Tunisian woman, meets the mysterious Youssef and leaves with him. A long night will begin, during which she’ll have to fight for her rights and her dignity. But how can justice be served when it lies on the side of her tormentors?

Sayeda, 2017 by Nesma Zazou (Egypt) 15min
A story of a mother who needs to get her child to a doctor’s appointment and encounters both bureaucratic and physical obstacles in her way.

Marie-Madeleine: a Female Chief, 2018 by Florence Ayisi (Cameroon) 66min
As Marie-Madeleine beats the African drum on her enthronement day, the gentle sounds signal a break with tradition. It is the dawn of a new era in the village of Nkol Ngock I. A woman will be their traditional leader. This is an unusual occurrence in most African societies, where the position of chief is customarily handed down from father to son. This documentary presents a rare glimpse into a community undergoing change. Social attitudes toward gender equality are changing, as men openly acknowledge and speak about the importance of women in development. Even though some villagers consider Marie-Madeleine a “stranger” because she lives in the capital city of Yaoundé, she is determined to learn about her culture and integrate into village life.

Restoring Focus, 2018 by Sue-Ellen Chitunya (Zimbabwe) 11min
In a country that is known for political controversies, one man, Dr. Solomon Guramatunhu, does all he can to uplift and empower Zimbabwean people through his work as a medical doctor and philanthropist.

I am not a Witch, 2017 by Nungano Nyoni (Zambia) 93min
An original and daringly satirical parable of magic and misogyny, superstition and social strictures, I Am Not a Witch tells the story of eight-year-old Shula, who turns up alone and unannounced in a rural Zambian village. The locals are suspicious of her. She becomes involved in a minor incident that escalates to a full-blown witch trial, where she is found guilty and sentenced to life in a government-run witch camp. There, she is tethered to a long white ribbon and told that if she ever tries to run away, she will be transformed into a goat. Soon she is forced to make a difficult decision–whether to resign herself to life in the camp, or take a risk for freedom.

Rafiki, 2018 by Wanuri Kahui (Kenya) 83min
Rafiki, which means “friend” in Swahili, is a love story between two young Kenyan women who live in a country where homosexuality is banned. Forced to hide their love from family, friends and the public, Kena and Ziki create their own private world where their love flourishes in hidden, snatched moments of joy and happiness. Inevitably, however, Kena and Ziki are unable to escape their country’s harsh laws and prejudices against gay people, and they are forced to choose between happiness, family, and safety.

Essebat, 2017 by Amira Ghehanne Khalfallah* (Algeria/ Morocco) 6min
A young boy must make a living cleaning shoes, but his imagination allows him to see the world from a new perspective.

Silas, 2017 by Hawa Essuman and Anjali Nayar (Liberia) 80min
The documentary profiles the life of Liberian activist Silas Siakor, a tireless crusader against illegal logging and a symbol of resistance for a new generation. Siakor trains a network of citizen reporters, using smart phones with apps, to expose land grabs and corruption in West Africa. He also reveals ties between President Ellen Johnson Sirleaf’s relatives and logging interests.

Fig Tree, 2018 by Aäläm-Wärqe Davidian (Ethiopia Israel) 93min
Set in Addis Ababa, Ethiopia, the film focuses on Mina, an Ethiopian-Jewish teenager who learns of her family’s plan to escape the war by immigrating to Israel. She fears the worst for her Christian boyfriend, Eli, who hides out in a fig tree to avoid being captured and forced into joining Mengistu Haile Mariam’s army. Mina is determined to solve Eli’s problems.