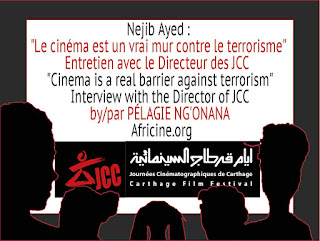 Interview with the Director of JCC, Tunis, by Pélagie Ng'onana in Tunis.
The director of the Carthage Film Festival presents a festival whose aim is to uphold its successes, while concentrating on strengthening the professional circuit of the cinemas in Africa and the Arab world. The JCC 2018 was held in Tunis (and various milieus), from 3 to 10 November 2018.

You have been at the head of the JCC for two years. What do you consider to be the main challenge(s) in the organization of this festival?

There are many challenges. The one in which we have succeeded since the creation of the festival is called the challenge of the public, which is probably the most difficult thing in most festivals. Our festival was created by its own public: the film enthusiasts of the ciné-clubs in 1966; while there was not even a Tunisian cinema, there were Tunisian film-goers. The creators of this festival, Tahar Cheriaa and others, were all the facilitators of film clubs. It was from that moment that this challenge was won, and to the present it has never been rejected. The second thing is to fulfil the wishes of the elders, which can be summarised in three or four points, which is what I called a return to fundamentals. It is essentially the fact that we are an African and Arab festival. Not an Arab festival with African zest. There must be a kind of balance between Africa and the Arab countries at the film level, at the level of the presence of film personalities. It is important for us. We are a festival of the South. We are a tri-continental festival. Strategically our strength is in Africa, of course. But it is also in Asia and Latin America. This is something that allows us to be different. The third thing is that we are an activist festival for cinema and the causes of our communities. We do not want to look like any other festival. We are in the heart of the 21st century but these are goals that were set in 1966. We are also a festival aimed at the international promotion of our films. That is, our films must have a podium in their own countries. Hence, facilitate the circulation of films between Arab and African countries, but also within other regions of the world. It has always been more or less done but never in a manner that has been really thought through. We have a professional platform that has been in existence for four years now. Starting this year we decided to make this platform much stronger, much more important. There is the technical workshop for completion and assistance with post-production. We have earned the challenge of the public; we must win the professional challenge.

There are five sections in this platform: Sabaka which means "network", Takmil, the International Conference, Carthage Talk and the Master Classes. We brought in stakeholders (distributors, operators, international sellers, producers ...) of a certain calibre and we chose them because they are interested in Arab and African cinema. I think this year there will be much more tangible results. We wish to become a hub where all those who want to deal with African and Arab professionals must come to Carthage. It takes time but I hope we will get there.

The selection of this edition, in fact, is a part of this activist cinema...

When we choose our films and our guests it is because they meet a certain editorial line. The film, of course, must be of obvious artistic and technical quality. It must be the transporter of ideas for the future. It is not just political militancy. It is a very broad concept. The term activist is very modern too; it is something that accompanies us in our present day concerns, with all that is happening, this effervescence. This return of a neo-colonialism, a kind of imperialism that is even changing colours and faces. Finally, it is always very important to be aware of it and that our festival reflects what these films reflect.

In the past, the Tanit envelope [the trophy of the festival of Carthage] went entirely to the director, now it is shared with the producer. What is the explanation for this?

It is more equitable. A film is not made with a director; there is a lot of upstream work that is done by a producer. It can be the same person, in which case he or she is entitled to everything. I am a producer, and I am against this idea that because a director signs, it is he or she who gets all the laurels. It would be a good thing that people understand that cinema is made in partnership. Once again, it is a return to fundamentals and for me it is much more fair that both the producer and the director benefit from the award. Especially since the work of producer today in African and Arab cinema has become crucial. Without producers it is a nightmare. When we have a concern for money we cut in the scenario, whereas when we have a producer, the director can say: “no I have to film that and it is up to the producer to find the money”. For me, it is important that this director-producer relationship is institutionalized and that there is a real separation. What we have done again since last year in relation to the festival's workshops is to invite the director and producer of the film. Because when we have to produce or co-produce a film, we need both people there to defend their project and look for partners. So, it is a whole philosophy behind it.

The screenings in the prison environment, it is also an initiative that reflects the JCC ...

We have been doing this for four years now, sincerely I think it is one of the most beautiful ideas of JCC. We do not do this alone but with two partners: the World Organization Against Torture and the Directorate of Prison Units. What is important is that there are structured screenings. It is not fair to only show a film in a prison and stop there, so it is organised with the idea of continuity. For example, there are some prisons in which a movie theatre has been built for us. There is now a film club there. In October this year, we screened a film in the country's largest prison. The prison administration constructed a huge tent for some 700 seats, about 500 prisoners saw the film and were able to have a discussion with the crew and the filmmaker. We also showed the film in the rooms of all the prisoners. For me it is a great experience and it is leading to cinematographic activities. Now there is even film production on the inside…But it's a responsibility. People who have to leave prison at some time, I do not want them to be marked by the fact of having been there. But they are galvanised. They make films, do theatre, music, they produce, they create ciné-clubs.

What is the response to the presence of JCC in other cities beyond Tunis?

In these regions also it is the same rationale. In the past, we did a kind of caravan, going to about fifteen cities, doing screenings only and then returning. Now we want to create festival bases in the cities where we go. The first of our conditions is that ultimately there is a festival that must take place, the second is that it must have technical conditions and the most innovative reception and that there is not film festival that already exists in the city. The third condition is that the regional, local authorities and the civil society are interested in the idea of ​​creating the festival and taking charge of the operation. It seems to be working, since last year we did it in four cities, and we have three festivals that are in the process of doing so. This year also we have chosen four cities…

Especially that the local public engages appropriately with cinema ...

A few years ago the public had a certain concern about the cinema houses. In fact they only came to the JCC and certain organized events. Today, with the interest essentially given to Tunisian cinema, theatres have relative success. In terms of audience, a Tunisian film beats out an American blockbuster. Our audience is a very open public. They accept what audiences in neighbouring countries do not. For example, films about sexual minorities. Elsewhere, neither the authorities nor the audience allows it. Here some of these films even win awards. This means that when we talk about value we are militant. And it is not a militancy that disrupts, but a militancy that constructs. We defend the fact that everyone has the right to speak; hence, there is tolerance. People listen to each other; watch each other's films, so they can discuss them. That is our mission as well.

An attack happened three days before the opening of the JCC. Do you think it was the festival that was targeted?

In all modesty, I know that the JCC were the target. This is the second time that it took place in Tunis and in both cases it was the JCC. In 2015, there was an attack in the midst of the JCC, and this year three days before the JCC there was an attack. Knowing the importance of this festival on the national and international level, they tried to create a sense of panic. What happened is exactly the opposite. None of our invited guests cancelled. In any case we operate within a simple logic. We are against terrorism. Cinema and culture in general is a real barrier against terrorism. The rationale for security is necessary, but it is this type of festival that allows one to say no to this kind of practice.