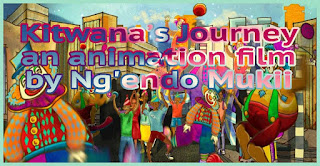 This is the story of a boy named Kitwana. A boy who laughed and played, and went to school, and did all the things that children do.

One day Kitwana’s life would change and not for the better. This however, nobody knew.

This short film is based on a true story, and commissioned by HAART (Awareness Against Human Trafficking) Kenya.

Awareness Against Human Trafficking (HAART) is a non-governmental organization based in Nairobi, Kenya. HAART is an organization dedicated towards ending modern slavery in Kenya and east Africa.

Ng'endo Mukii holds a Master of Arts from the Royal College of Art (2012) in London, and a Bachelor of Arts from the Rhode Island School of Design (2006), USA.
​
She is based in Nairobi as an independent filmmaker, participating in artist residencies and holding workshops at various institutions internationally.

Her films have won multiple international awards, including Silver Hugo for The Best Animated Short at the Chicago International Film Festival 2013 for Yellow Fever, Best Animation Production at the 2015 Kalasha Awards for This Migrant Business, and the 2017 Immersive Encounters Grand Prix for her 360 virtual reality film, Nairobi Berries.