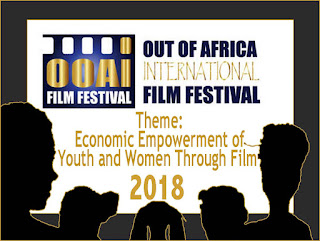 Out of Africa International Film Festival (OOAIFF) announces its 4th edition to be held on November 27-29 2018 at the Michael Joseph Center-Safari.com and 1 December 2018 in Thogoto Forest, Karend End.

The team behind the festival is committed to discovering and developing African potential in the 7th Art.

The festival’s theme: Economic Empowerment of Youth and Women Through Film

The aim is to provide a platform where filmmakers, experts and general public interact to open up the local industry and offer more opportunities.

Films from different languages from around the continent are expected for screening. The event also integrates talks, workshops and film and book market as well as offering a networking opportunity for exhibitors, industry players and general public.

41 films from 17 countries on planet cinema were submitted and a total of 33 films will be screened.

With top 5 countries as:

Email ThisBlogThis!Share to TwitterShare to FacebookShare to Pinterest
Labels: Out of Africa International Film Festival (OOAIFF)