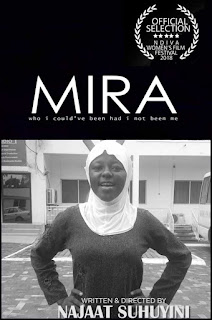 Description
A girl forced out of her dreams due to a superior command.


Najaat Hussein is a film-directing student of National Film and Television Institute (NAFTI), she participated in FACE OF NAFTI beauty pageant and film contest organised by NAFTI's Student Representative Council abbreviated NSRC. NSRC trained Najaat and gave her all the needed support to shoot her own film just as it did to all nine contestants. Najaat won the film-making contest and beauty pageant with her film; MIRA. (Source: https://filmfreeway.com/Mira-1)

Image: Compiled from screenshots of film