Lucy Gebre-Egziabher: A Woman on a Mission 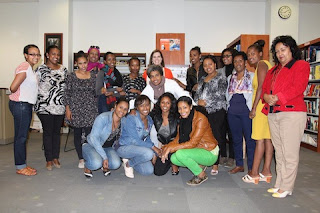 Lucy Gebre-Egziabher: A Woman on a Mission

U.S.-based Ethiopian filmmaker-professor Lucy Gebre-Egziabher is a woman on a mission to empower as many women as possible to take leadership roles in cinema. While planning for the curriculum for her seminar, “From Script to Screen” as a Fulbright Scholar in Addis Ababa in the fall of 2016, she put into practice what she already understood about the importance of having gender parity in her classroom. She asked the admissions representative to actively encourage women to enroll. Women answered the call. Her empowerment strategy had proven successful: the U.S. Embassy in Addis Ababa invited her to lead a screenwriting workshop for Ethiopian women journalists and filmmakers in conjunction with its consciousness raising campaign on gender-based violence (GBV). The women responded again energetically: these women were on a mission! She developed the screenwriting workshop, entitled “Telling Herstory”, around the theme of gender-based violence. Each of the three scriptwriting finalists produced a five-minute film, funded by the U.S. Embassy, which was screened at the launching of its GBV campaign.

The “Telling Herstory” initiative was the beginning of what Lucy hopes to be an ongoing collaboration between her home institution, NOVA, Northern Virginia Community College where she teaches filmmaking, and Ethiopia.

I recently asked Lucy about their current activities and, yes, she and the women are still on a mission! 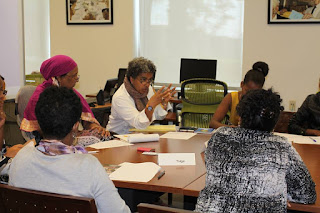 What have you been working on since your “Telling Herstory” workshop in Addis?

I am happy to report that two years after the meeting in Addis with the Women on a Mission team I am still in touch with them and am continuing to mentor some of these talented sisters! When we left off, we had agreed that the first project to tackle would be the documentary on the Yellow Movement, about the Ethiopian women lawyers/activists for women’s rights.

I am blessed to say that I am still working with three of the Women on a Mission team. The rest are there in spirit, but since some of them come from print media, broadcast, etc., their involvement is less. 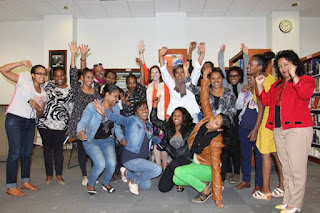 Talk a bit about the three Women on a Mission who you are mentoring.

Serkadis Megabiyaw is the filmmaker whose short won the Dean's Award for cinematic distinction at the 2017 NOVA Student Film Festival. She also has a TV show in Addis called Endewaza. Meaza Hadera is a journalist for EBS (Ethiopian Broadcasting Service) and has made a short that is timely and on point after our training; it addressed the issue of child marriage in Ethiopia. Redeat Abate is an architect by training but has a passion for filmmaking; she is a screenwriter and a set designer, and in my opinion would make a great producer! I have been mentoring these talented women as well as giving moral support, or helping them network with industry people.

Just to give context, the Film Collaborative International is a forum that you created, bringing together the works of the film students at NOVA and in Ethiopia to be presented at the NOVA Student Film Festival. And Serkadis Megabiyaw, who you mentored during your Fulbright stay in Addis Ababa, won the Dean’s Award! Bravo!

To return to your Women on a Mission projects, there are a few in the works?

Yes, one is a documentary on the Yellow Movement that I will be executive producing. It was a very high-profile case due to local lobbying. The movement was also the first to blog and post about the case of Hanna, a young girl who was gang raped and left to die, a few years ago. The Yellow Movement established its niche as a nucleus serving to mobilize, influence, lobby and advocate with and for women of Ethiopia, including combating gender-based violence. This project is in pre-production stage. [Follow link for more information about the Aberash Case].

The second is a short narrative on climate change, which is part of the Films Without Walls series. These women are representing Ethiopia in this international film initiative and will make a short film that will be screened at the 2018 NOVA Student Film Festival – Films Without Walls Series. As of today, we have several countries from around the world participating.

I just want to recall that there was post on the African Women in Cinema Blog announcing the call for collaborations for the Films Without Walls Series and you talk about how it came about.

What is the other project that is in the works?

Finally, the formation of the Ethiopian Women Filmmakers Association (EWFA) is still a goal and a dream.  I believe it can serve as the entity needed through which to provide support and training opportunities to young and upcoming Ethiopian women filmmakers in Ethiopia. The idea was to have the EWFA produce the documentary on the Yellow Movement and in turn have the women lawyers from the Yellow Movement help with the legal work to establish EWFA. Sisters supporting and helping to uplift each other is the motto! Amen!

And there is a more expansive project to get other women on a mission involved!

Yes, I am working as we speak to develop "Telling Herstory" screenwriting workshops for young women filmmakers to be delivered in various countries in Africa. That is also a dream! Anyway, will keep you posted. Until the next one!