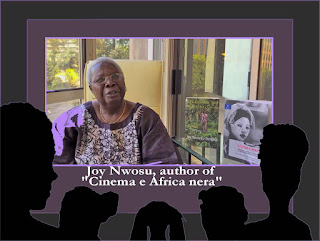 A discovery in plain view. Joy Nwosu’s book on cinema and Africa, "Cinema e Africa nera" published in Italy in 1968, was reedited in 2014, also in Italian, under the title Cinema e Africa. Published by Aracne editrice.

At the time, a flurry of interviews and articles emerged in English and Italian. The African Women in Cinema Blog has now discovered this jewel with much excitement!