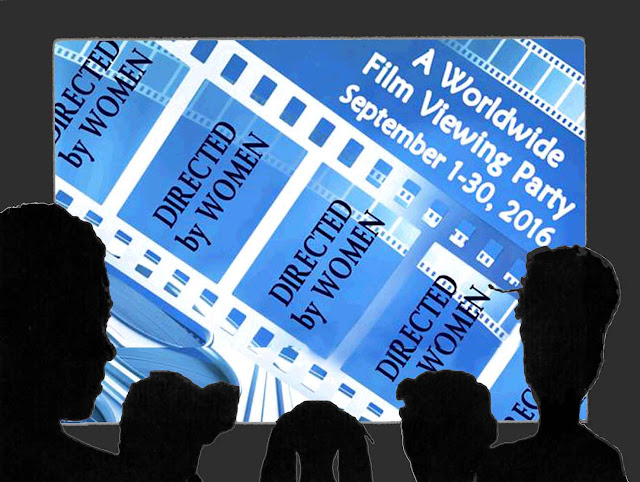 Barbara Ann O’Leary, founder of #DirectedbyWomen Worldwide Film Viewing Party discusses the objectives of the initiatives, and activities and projects that took place during the inaugural event in 2015 and throughout the year.

Barbara, could you give a background to the Directed by Women Worldwide Film Viewing Party project?

#DirectedbyWomen is an initiative that I dreamed up in 2014 to help bring joyous, loving, appreciative attention to the work of women film directors.  The vision was to have a Worldwide Film Viewing Party to galvanize attention. In September 2015 we had the first #DirectedbyWomen global party. Groups and individuals in various countries organized events from house parties, community screenings, online streaming live tweeting events, and more. Existing festivals like Portland Film Festival and Scalarama joined in, and there were even a few multi-day/multi-city festivals planned specifically as part of DirectedbyWomen Worldwide Film Viewing Party. The hashtag #DirectedbyWomen was used via social media to help share news about what was unfolding during the 15-day celebration.

What are the objectives and projected outcomes?

The intention of the #DirectedbyWomen Worldwide Film Viewing Party is to invite film lovers to become aware of the thousands and thousands of women who have directed/are directing films, to inspire exploration and appreciation of their work, and to foster a sense of growing community among film lovers. Ultimately the intention is to help the world fall madly in love with films by women directors.

What are the dates and platform?

The #DirectedbyWomen Worldwide Film Viewing Party takes place 1-30 September 2016. It is a blend of in- person and online events. The events are organized by film lovers who hear about the celebration and choose to create events, so the party is everywhere and anywhere.

What contribution can The Centre for the Study and Research of African Women in Cinema, especially its social media networks, play in the promotion of the #DirectedbyWomen project?

I hope you'll blog and tweet out wonderful films by African women as you did last year. That was an excellent contribution to the celebration. That helped many #DirectedbyWomen party participants discover and fall in love with work by African women filmmakers. There are SO many amazing women film directors to explore. I hope we'll also be able to draw attention to your YouTube archive of interviews and other resources. It's a real treasure trove. I'm open to whatever other ideas you have. This party is designed to be non-hierarchical, so everyone is invited to celebrate in ways that resonate for them.

2015 was the inaugural year for the Directed by Women project. Talk about its successes, its overall reception and lessons learned?

When I first envisioned #DirectedbyWomen Worldwide Film Viewing Party, I saw it as a one-time thing, but before it even started people active in planning events began talking about what they'd do NEXT YEAR. It soon became clear that this had a life of its own and needed to have room to continue. The idea of the party has been to concentrate attention by holding events in various locations, organized in a Do-It-Yourself style so that the richness of what women film directors have created since the beginning of cinema history through to today could begin to reveal itself more fully. Although no one of us could participate in all the events, we were able to NOTICE the ways in which others were celebrating and there was a very palpable sense of connection across time and space. Many people commented on this.

Events were held in Australia, Canada, India, Italy, Spain, Turkey, UK, USA, and more. I'm not entirely sure where in the world Film Viewing Parties took place as not everyone was remembering to post their information on our global map. There was also a lot of activity online as people shared about their personal film viewing, blogged about women film directors, etc. I've been excited to see new initiatives and collaborations arising out of last year's Worldwide Film Viewing Party. I'd like to see even more interaction between and among people active in the celebration. Let's make it easier to share work by women directors by collaborating together.

Fifteen days wasn't enough, so this year we've spread out to celebrate during the entire month of September. It makes it easier for monthly film screenings to coordinate with #DirectedbyWomen and gives more opportunity for people to find time to create events.

People who heard about the celebration and thought, "This is AMAZING!" ran off and created incredible events - large and small. This is an initiative that seems to help activate a sense of individual freedom to take action while fostering a deepening sense of global community.

Celebration and appreciation are powerful transformative processes. Turning our attention to what we want to see flourish helps expand invigorating possibilities. I'm looking forward to continuing to invite more and more people in the global film community to turn their attention toward what they want and innovating together to help that thrive. The #DirectedbyWomen Worldwide Film Viewing Party has opened up some possibilities. Let's keep going. Everyone's welcome to co-create.

Yes... I loved that. I hope you'll do that again. This year I've been offering a #VideoOfTheDay on the #DirectedbyWomen website and also sharing on social media. I'd love to include even more work by African women in that process. Please send me links!

I've also created an online database of women who have directed film: http://directedbywomen.com/en/directedby.html It's a work in progress. I'd love to include EVERY woman who has directed. Recently I've launched #DirectedbyWomen Timelines to share filmography and incorporate content from other sites around the web. My vision is to weave in interviews from African Women in Cinema and so many other places. I would love to see this resource expand during September to help make it easier for film lovers to discover women directors from all around the world.

And of course because this is a D-I-Y celebration everyone is invited to create events of their own, list them on the #DirectedbyWomen global calendar - http://directedbywomen.com/events/ - and share about them via social media. Any activities that celebrate and appreciate women directors are welcome in the global party. They don't have to be events specifically created for #DirectedbyWomen.

Future initiatives as it relates to the project?

I'm envisioning the #DirectedbyWomen Worldwide Film Viewing Party continuing each September. I'm hoping to see the database and timelines continue to expand. I'm cultivating a Conversation series feature.
I've been celebrating birthdays of the women directors whose birthdays I know by tweeting and sharing on Facebook and Tumblr.  But that 366 Days of Birthday Celebrations is a one-year event. I've enjoyed it and it's been a privilege to honor and celebrate so many women in that way, but it's been a LOT of work, so I won't be doing that again next year.

We'll have to see what happens next. Definitely I know I will continue to bring loving attention to as many women film directors as I can on a regular basis as I think it is so important for film lovers to have the opportunity to explore and relish the work of women directors. And thank you for all the amazing work you do to help the film world awaken to and embrace the work of African women directors. The resources you share are so valuable. Your work inspires me. Thank you.

Email ThisBlogThis!Share to TwitterShare to FacebookShare to Pinterest
Labels: #DirectedbyWomen