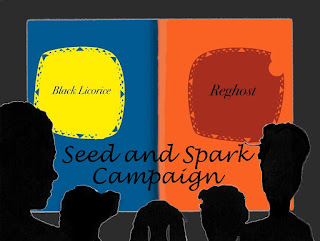 About The Project
“Reghost” is a buddy comedy set in a Zombie Apocalypse.

"Best friends Johnny and Andrew have only each other to depend on after surviving the zombie apocalypse. When Johnny is bitten and on the verge of turning, Andrew a genetic engineer, is caught in a race against time in his attempt to reverse the effects with unpredicted results."

Jordan is a struggling actress trying to catch her big break in Los Angeles while working as a bank teller in the meantime. Eric is an out of work writer, trying to make a feature film. When his crowdfunding campgain fail, he and his partner-in- crime Matt come up with an unorthodox method to get the money for the film.

Director's statement
When working any project, I find myself infinitely excited by the potential around me. To be able create visual and visceral working aesthetic, a beautiful collaboration that is like a heartbeat.
There is something so incredible about being able to pull and get actors and crew excited about words on a page. Putting together the roadmap from script to picture lock and watch it take shape.
Casting the actors who show such incredible talent and range was such a wonderful experience that is to this day still a learning experience for me as a filmmaker. Seeing what connects them to the characters and the story reminds me why I write as well and create characters such as these.

These two stories came from moments of personal epiphany and in the same way the idea and plan to shoot as one production. By combining the films into one production schedule, aim to maximize on tell 2 unique comedies encouraging you to participate in the process. By creating a synergetic production, it will enable the most efficient story telling while creating final products that can carry that synergy through the festival circuit and distribution.

Visit the Seed and Spark page: Reghost and Black Licorice for details about the fundraising efforts and to make a contribution. No Longer Active
Posted by Beti Ellerson at 21:57