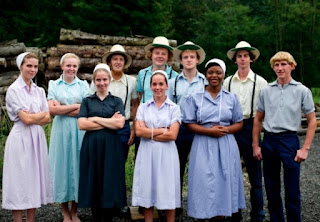 An African American Mennonite, begins her mornings at a local chapel where her adoptive mother (Annie) preaches. She and three other African Americans, including one named Caleb, stand out like sore thumbs amidst the predominantly White congregation. Unlike the rest of the members in church, Zenith is distracted, completely disconnected from her mother’s powerful sermon about the importance of family. After church, Caleb tries to connect with Zenith but she remains cold. On their way home, Zenith and Annie pass a drifter walking along the road, listening to his iPod. Back at the farm, while doing their chores, Annie tells Zenith that she needs to think about settling down. After all, she’s not getting any younger and Caleb will not wait forever. They are soon interrupted by the arrival of the drifter (Angel) they passed on the road. He’s there in response to an ad Annie placed seeking a farm hand. Although he only speaks Spanish, Annie hires him anyway. Zenith’s initial apprehension quickly turns to intrigue, as she and Angel slowly build an unspoken connection over the course of the work day, exacerbating her dilemma over whether she should stay her the safety of her community or explore the outside world.

Ellie Foumbi was born in the Central African nation of Cameroon.  She received strong training in classical French theatre at the French American School of NY.  Last summer, she was awarded the New York Women in Film and Television scholarship for the production of her short film, Avalanche, a psychological horror movie about a young wife’s downward spiral.  Ellie added the role of producer to her resume this year by co-producing two other films, including the 2015 HBO production grant winner, Search Party, starring veteran actress Rosalyn Coleman.  Ellie’s other projects include the short film that she co-wrote and co-directed with Michael Niederman, Biltmore, which stars Laura Gómez of Orange is the New Black.  Her first screenplay, The Color of Paradise, was a finalist for the 2012 Sundance Screenwriting Lab and her short screenplay, A Thing of Beauty, placed in the Top Ten Percent of the 2014 BlueCat Screenplay Competition.  Ellie was selected for a directing exchange at the prestigious La Fémis in Paris, France in participation with “Atelier Acteur mise en scène.”

Visit the Indiegogo page: Zenith for details about the fundraising efforts and to make a contribution.