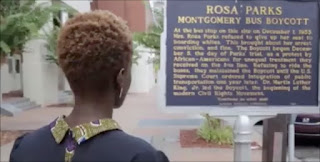 At the moment of the broadcast of the documentary by the anti-racism activist Rokhaya Diallo, «De Paris à Ferguson : coupables d'être noirs» | "From Paris to Ferguson: guilty of being black", the 23rd March on France Ô, the journal Libération takes the opportunity to recount the story of twelve Black or Arab men who died during or after being arrested by the French police, under the title: “Police violence: from Paris to Ferguson, who is the French Michael Brown?” http://www.liberation.fr/france/2016/03/23/violences-policieres-de-paris-a-ferguson-qui-sont-les-michael-brown-francais_1441425

Translation of text below:

Michael Brown, Freddie Gray, Tamir Rice, Eric Garner... The names of these African Americans, victims of police violence, have been widely reported in recent months in the French media, and the widely covered racial tensions from Ferguson to Baltimore that their deaths revived. Last summer, in a series of portraits of the victims, the [journal] Libération revisited these missteps of the U.S. police. And in France? According to a documentary by Rokhaya Diallo, broadcast Wednesday at 20:50 on France Ô, the deaths during or following an arrest are often treated as a miscellaneous, non-event in the news, and the racial dimension widely silenced. "In the mirror that we hold on Ferguson [the town in Missouri where Michael Brown was killed], France should recognise its unsettling silhouette", a comment, which the journalist and essayist wrote in a column (co-signed with the anti-racism activist Sihame Assbague) published in Libération in 2014.

It is not only in Ferguson...

However, the racial dimension is at the heart of police violence in France, confirms a report on the subject published in recent days by ACAT (Action des chrétiens pour l’abolition de la torture | Christian Action for the Abolition of Torture). Though no official statistics identifies those killed or injured during police or gendarmerie operations in the country, the Christian association, which focused on 89 cases of alleged abuse between 2005 and 2015, has counted 26 deaths. "At least 22 [of them] were of people from visible minorities," it said in the report. In other words, more than 80%. The association also denounced the fact that this racism-tinged violence is often ignored and unpunished. In reports published in 2005 and 2009, Amnesty International also signaled this impunity and even evoked "racist motives". These practices have never been brought before the courts, and convictions for acts of police violence called for by the families and relatives of victims are extremely rare.

Libération revisits the circumstances of the death of twelve of these men, Black or Arab, who have died in recent years during or after a violent arrest, after being fired upon with a Taser or flash-ball, in a police vehicle or a police station, or shot by police. (The text describing the 12 incidents is in French).