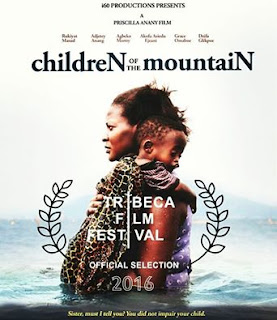 Priscilla Yawa Anany. Born in Ghana, Priscilla grew up in two other African countries before migrating to the United States in 2003. In the US, she attended the University of North Carolina School of the Art, School of Filmmaking and got a Bachelor’s degree in Fine Arts. Priscilla also earned a Masters of Science degree in communications at The New York University as she worked as an independent filmmaker. Priscilla is currently running her film production company i60 Productions in Accra, Ghana. (Text from Children of the Mountain website).

Priscilla Yawa Anany had this to say about her film:

Children of the mountain is a story about a woman who gives birth to a deformed and sickly child. Because she’s criticized and blamed for her child’s conditions, she becomes determined to do everything in her power to find a cure of him. When all fails and she becomes hopeless, she’s pushed to getting rid of her child.

Where can I see this film in London UK?