ZOOM IN ON WOMEN ! : Call for Scripts 2016 – Women Filmmakers of Zimbabwe, WFOZ 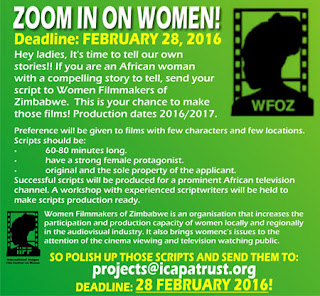 Zoom in on Women! : Call for Scripts 2016– Women Filmmakers of Zimbabwe, WFOZ

Hey ladies, it’s time to tell our own stories!! If you are an African woman with a compelling story to tell, send your script to Women Filmmakers of Zimbabwe. This is your chance to make those films! Production dates 2016/2017.

Preference will be given to films with few characters and few locations. Scripts should be:

- 60-80 minutes long.
- Have a strong female protagonist.
- Original and the sole property of the applicant.

Successful scripts will be produced for a prominent African television channel. A workshop with experienced scriptwriters will be held to make scripts production ready.

Women of Zimbabwe is an organisation that increases the participation and production capacity of women locally and regionally in the audiovisual industry. It also brings women’s issues to the attention of the cinema-viewing and television-watching public.

So polish up those scripts and send them to:
projects@icapatrust.org
Deadline: 28 February 2016!

Email ThisBlogThis!Share to TwitterShare to FacebookShare to Pinterest
Labels: WFOZ