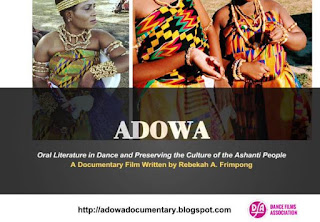 Ghanaian-American Rebekah Frimpong, whose goal is to tell the story of the Adowa dance of the Ashanti people of Ghana, launches an Indiegogo crowdfunding campaign for the documentary film project "Adowa".

Adowa is a documentary film about oral literature in dance and preserving the culture of the Ashanti people of Ghana. We will travel to Ghana to capture the beauty of traditional funeral dance called Adowa of the Ashanti people. Our film explores how the Adowa dance came to be and the tradition and history behind this dance using language, music, and the movements of the Adowa dance to reveal the story.

For more information on the Indiegogo campaign and to make a contribution: https://www.indiegogo.com/projects/adowa-documentary-film-by-rebekah-frimpong#/story
Posted by Beti Ellerson at 19:23