African Women in Cinema addressing the cultural, social and political manifestations of migrancy 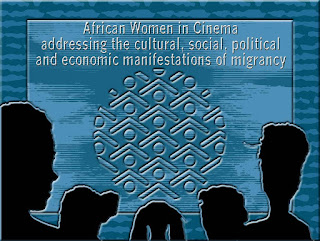 Initially a tribute to migrants lost at sea, this revised post highlights migrant stories by African women of the moving image.

African women of the moving image have a particular concern for the plight of the migrant, heightened by the dramatic impact of migrancy and its consequences and effects in many African countries. They have used diverse manners of storytelling to highlight the cultural, social and political manifestations of migrancy, especially as a phenomenon that has myriad intersecting implications for the homeland and the receiving countries. And increasingly a focus on identity processes and the formation of migrant diasporic communities. Some focus on the perilous passage in the desert and at sea, others on those who await their return: wives--since the majority of those who leave are men, whole families, neighborhoods,villages. Still others direct their cameras at the migrant experiences at the site of their destinations-- waiting grounds in many instances, or, semi-permanent spaces where hope, despair and possibility intermingle.

A selection of reflections on migrant stories by African women.

Alice Diop: La permanence | On call
"This is a film about the pain of exile, but it is told through the contemplation of the faces of these men. What grabbed me when I started working on this subject were the images of these undifferentiated and anonymous masses who flock to our doors. While initially, this image was not negative in its intent, it produced something that can be experienced as threatening. For me it was important to put faces, to put names and specific stories on what is often treated as an all-encompassing problem."

Mame Woury Thioubou: 5 Étoiles
The film highlights the lives of African migrants in Lille, France in order to bring these "undocumented migrants" to the realisation that after braving the desert and the sea to arrive in France, Europe is only the beginning of their ordeal…."The film does not tell young Africans not to leave, but what I want them to know" is that Europe "is not going to be the end of the ordeal, that it is the beginning of a new struggle"…

Rahel Zegeye, a migrant worker in Lebanon and filmmaker, has this to say about why she made her film Beirut:
"My main aim with the film was to show a different perspective on the lives of Ethiopian workers in Lebanon. We often hear stories of abuse and bad treatment of Lebanese employers towards their foreign domestic workers (maids). Most media and organizations working to help migrant domestic workers (MDWs) in Lebanon portray the worker as a helpless victim, her fate ruled by evil agencies and bad madams. Although this often does happen and is definitely an issue that needs attention, reality is much more complicated. I want to shed light on the inner lives and thoughts of a domestic worker, an aspect which is usually hidden from the Lebanese and foreign public."

Mati Diop : Atlantique
"I especially wanted to pay homage to this youth vanished at sea. This is my primary intention because it was very important for me to dedicate a film to this lost generation, ghost, while giving it life through the living. It is also a way of making sense out of their actions. They have not reached Spain (destination targeted by young Senegalese who go to sea), their dream... But maybe they are for many of those in the riots of 2012 (Note by Africine: especially driven by young Senegalese who opposed a new term of the incumbent President Abdoulaye Wade). Having disappeared at sea, these young people may have allowed the rebirth of a new youth."

Mary-Noël Niba : To Leave?
In this documentary, Mary-Noël Niba is interested in the stories of migrants and their personal trajectories. Far from the images we all know, she gathers rare voices and offers a unique perspective on illegal economic immigration.

Jacqueline Nsiah’s digital storytelling from the diaspora
"I termed my research, which is part of an academic thesis “Returning from exile” because the motivation for most of the Ghanaian diaspora is to return on behalf of their parents and build this great nation, something that most of our parents were not able to do for various reasons…Also, one mustn't ignore the many Ghanaians who are still trying to leave Ghana almost daily for economical reasons. A lot of them are working class or lower who struggle to find work or make a decent living in Ghana. They spend thousands of dollars or euros, all their savings and risk their lives in hope for a better life abroad."

Rahel Zegeye: The Experiences of an Ethiopian Migrant Worker and Filmmaker in Lebanon
http://africanwomenincinema.blogspot.com/2011/09/rahel-zegeye-experiences-of-ethiopian.html