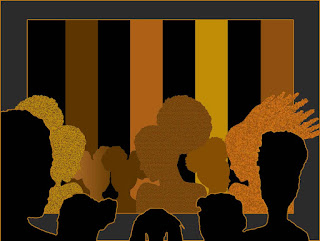 While the filmic exploration of female subjectivity and agency is a recent trend, identity has been a theme since the earliest period of African women’s cinema. Pioneer Safi Faye’s first film La Passante made in 1972, relates the experience of a young Senegalese woman living between two cultures. Faye acts as the main character, using Paris as the setting. In a very personal way, the film echoes her own experience as a woman "divided between two cultures—French and Senegalese”, to use her own words to describe the context at the time—just a decade after independence.

Now, more than a generation after African independences, an Afro-European presence is emerging among filmmakers who continue to negotiate bi-cultural, mixed-race identities by exploring the tensions, ambivalence and ambiguities in the political, social and emotional fabric of their environment; as they attempt to relate their desire to know and understand their own multiple layers and that of their history. "Afro-European" in the context of this discussion includes Africans who have migrated to Europe and now make it their home; Africans who were born and/or raised in Europe; those who have both European and African parents.

In Isabelle Boni-Claverie's film Pour la nuit (For the Night, 2004), set in France, race is an apparent signifier. But yet, Boni-Claverie states that the film was to originally take place in her native country, Côte d’Ivoire and that the male character was to be cast as an Ivoirian; thus, the film scenario was adapted to the change in film location. For her the site and casting change makes no difference to her story--a young woman buries her mother, a young man buries his life as a bachelor; however, for the viewer the change relates the film in a very different way. Similarly, British-Nigerian Ngozi Onwurah views her film The Body Beautiful (1991), set in Europe, as having a particular African film language while her film, Monday’s Girls (1993) set in Africa with distinct African signifiers, as a specifically European film in terms of its narrative. Moreover, there is a clear refusal to contextualize their films within a racialized lens or a Europe-Africa binarism.

Then there is the film, Sous la clarté de la lune (Under the Moonlight, 2004) by Apolline Traoré from Burkina Faso—if one looks at the film in a racialized context, one falls into the box from which Onwurah and Boni-Claverie try to escape. And yet the narrative is driven by the underlying question of culture in the context of race. The young Martine has become someone very different, having being raised in Europe by her European father, rather than in Africa by her African mother.  The question of African values becomes the crux of the film. A subtext of the two films, Sous la clarté de la lune and Pour la nuit, is death and separation from the African mother. A bi-racial girl/woman raised in Europe, the African-European girl/woman connected to her European father. Muriel, raised by her African mother in France, is ashamed of her mother’s African-ness, her mother’s speech, her voice. Both father and daughter reveal to each other for the first time, at the site of the African woman’s reposed body, the tensions that surrounded their relationship to her African-ness. The father accuses the daughter of being ashamed of her mother because she was African; the daughter accuses the father of not really being interested in understanding his wife, knowing her deeply, knowing who she was. Though this beginning is only a brief part of the story, it provides the context for the emotional drama that ensues. The remainder of the film traces the emotional journey of Muriel and a young white man who she encounters along the way.

Thus the two contemporary films situate in oppositional relationship the origins of the parents of the bi-racial characters—Africa-Europe—and while this tension is not the main thrust of Pour la nuit, it is for Sous la clarté de la lune. In the latter film, the uprooted Martine, upon her brief return to Africa, discovers her African roots through her mother, though she does not realize the woman’s relationship to her, as she was taken away by her father, while still a baby. The mother suffered a double loss, her daughter and her voice, as the trauma of the kidnapping rendered her mute. The mother rediscovers her daughter only to lose her again to death.

The documentary film, Les enfants du blanc, points towards a trend of reinscribing race at the intersection of postcolonial discourse and the ongoing tension of colonizer/colonized positionality.  French-Burkinabé, Sarah Bouyain, uses her own mixed-race identity to explore the lives of her grandmother and great-grandmother. The latter, forced into concubinage with a French colonial during the first decades of the 20th century, gives birth to Sarah Bouyain's grandmother, a mixed-race woman who grew up in Burkina Faso. While the film traces this colonial practice and its aftermath—the treatment of mixed-race offspring of French colonials—it also indicates a trend among a contemporary generation of Afro-Europeans to deal with the subject of Afro-European metissage as identity.

As early as 1988, Nigerian-British Ngozi Onwurah explores her experiences growing up as a “coffee-coloured” child in all-white Newcastle, England. She continues this exploration in The Body Beautiful, casting her mother, Madge, a white woman, in a multilayered story at the intersection of race, normative standards of beauty dictated by the dominant culture, and breast cancer—of which her mother is a survivor. Nigerian-Welsh Branwen Okpako’s films, Searching for Taid (1997) Dirt for Dinner (Dreckfresser, 2000) and Valley of the Innocent (Tal der Ahnungslosen, 2003) also explore racialized identities. The first two films are investigative documentary dramas. Searching for Taid traces the experiences of her brother, Edore Okpako in search of his Welsh identity. Dirt for Dinner is a thriller of sorts about Afro-German Sam Ngankouo Meffire, a model citizen, police-of-color turned bad—which in part has to do with the torment he experienced after he learned about his African father’s fate. The fiction film Valley of the Innocent, also set in Germany, explores mixed-raced police officer Eva Meyer, who grew up as an orphan, in search of her parents’ identities. Her investigative work leads her to her mother.

As African women use cinema as a vehicle to express their experiences and show their vision of the world, geographies are transcended, boundaries blurred, nationality and country extended, identity becomes multiple but also fragmented, their cinematic gaze reaches within and beyond. They examine their social, political and cultural location, contextualized within the larger framework of postcoloniality—encompassing a Duboisian, “double consciousness”, a Fanonian, “black skin white mask”.

British-Nigerian Remi Vaughan-Richards talks about “Faaji Agba”, her passion for cinema, and the two cultures she embraces
https://africanwomenincinema.blogspot.com/2015/10/british-nigerian-remi-vaughan-richards.html


Eliaichi Kimaro: Tracing her Tanzanian roots in "A Lot Like You"


Marie-Clémence Paes: “there are treasures that are transmitted from generation to generation by word of mouth”

Claude Haffner: "Black Here, White There" | "Footprints of My Other "
https://africanwomenincinema.blogspot.com/2012/03/claude-haffner-black-here-white-there.html


A Conversation with Philippa Ndisi-Herrmann
https://africanwomenincinema.blogspot.com/2011/11/a-conversation-with-philippa-ndisi.html